The game is called “Name That Insolvent Banking System.”

The way you play the game is by trying to guess which the countries whose Bank Assets to GDP ratios are in the below chart. There are only seven countries and I’ll tell you that they’re all western economies in the developed world.

If you win this game, you win the knowledge of knowing which countries’ banking systems are leveraged beyond any credibility. You can then invest accordingly, sheltering your assets from these banking system disasters. You can also ignore the tripe being spewed by the various political leaders and Central Bankers about everything being great in the global financial system. 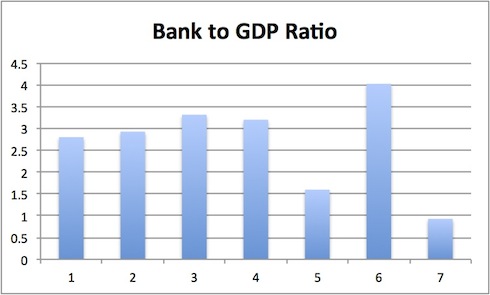 OK, I’ll give you a hint, one of these countries is the US. We’re often cited as the debt nightmare of the world, which makes all other countries look good in comparison. So which one is the US?

Did you guess number 6?

OK, here’s another hint, the other six countries are all based in EUROPE.

Give up? Here’s the answer: 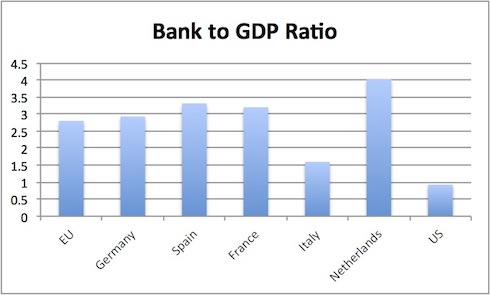 As you can see, the US’s banking system is in fact dramatically smaller relative to its GDP than the big players in Europe. As much grief as I and others have given our financial system about being overleveraged and filled with toxic debts, the US is NOTHING compared to Europe, including the allegedly rock solid banking system of Germany.

It’s also worth noting that France, which is considered to one of the essentially sovereign backstops of the EU is in fact one of the worst offenders when it comes to having a totally out of control banking system. Remember this when you hear French politicians talking about the EU crisis being “over.”

So… the next time you hear someone on the TV talking about great things in Europe are, remember the above chart and ask yourself… how can a country be in great shape when it’s banking system is over 200% larger than its economy? Just what are all these “assets.”

And the multi-trillion Euro question: how much of them are in fact garbage?

So if you have not already taken steps to prepare for systemic failure, you NEED to do so NOW. We’re literally at most a few months, and very likely just a few weeks from Europe’s banks imploding, potentially taking down the financial system with them. Think I’m joking? The Fed is pumping hundreds of BILLIONS of dollars into EU banks right now trying to stop this from happening.

I’ve already alerted Private Wealth Advisory  subscribers to 6 trades that will all produce HUGE profits as this mess collapses.

We’ve also taken steps to prepare our loved ones and personal finances for systemic risk with my Protect Your Family, Protect  Your Savings,  and Protect Your Portfolio Special Reports.

You’ll immediate be given access to the Private Wealth Advisory archives, including my Protect Your Family,Protect Your Savings, and Protect Your Portfolio reports.

You’ll also join my private client list in receive my bi-weekly market commentaries as well as my real time investment alerts, telling you exactly when to buy and sell an investment and what prices to pay.

So you get my hard hitting market insights, actionable investment recommendations, and real time trade alerts, for one full year, for just $299.99.