Are You Ready For What’s Coming Our Way From Europe?

The EU Crisis went into overdrive in the spring of 2012 when the Spanish banking system as a whole nearly collapsed. Having pumped €1 trillion into EU banks via its LTRO 1 and LTRO 2 programs in December 2011 and February 2012, the European Central Bank found itself facing a problem far greater than Greece (Spain’s banking system is over €3.7 trillion assets in size, compared to Greece’s  €338 billion) and on the verge of losing control of the entire system.

To understand why this happened, you first need to understand that European banks as a whole are leveraged at 26 to 1. In simple terms, this means they have just €1 in capital for every €26 in assets (bought via borrowed money).

When you are leveraged at these levels you only need the assets you invest in to fall 4% before you’ve wiped out all of your underlying capital (€26 * 0.04 = €1.04). At that point you are total insolvent.

In the case of Spain, Spanish banks were leveraged at 20 to 1 with most of their borrowed money invested in Spanish sovereign bonds. At these leverage levels Spanish Sovereign bonds only needed to fall 5% to render the Spanish banks insolvent. And in the spring of 2012, Spanish bonds were plummeting.

At this point, ECB President Mario Draghi had to do something to make Spanish bonds rally. He couldn’t simply start buying them because Germany had stated time and again it was against the open monetization of bonds. And the ECB cannot do anything without Germany’s support if it wants to keep the EU whole.

So Mario Draghi delivered the mother of all head fakes, first hinting at providing unlimited bond buying for EU sovereign bonds in June 2012, before officially stating that this would be the ECB’s policy is September 2012.

Note very carefully that Draghi didn’t actually buy any bonds. He simply stated that he would if he had to and if countries formally requested a bailout (handing over control of their finances to the ECB and Germany in the process).

The promise worked, effectively putting a floor beneath EU sovereign bonds. Investors, now convinced that the ECB would buy if it had to, began to buy Spanish debt again. Spanish bonds rose, and Europe’s banking solvency crisis was considered “over.”

And then came Cyprus.

With some €83 billion in assets, Cyprus’s banking system is well over FOUR times the size of its GDP, putting it in far worse shape than Spain, France, even Greece. 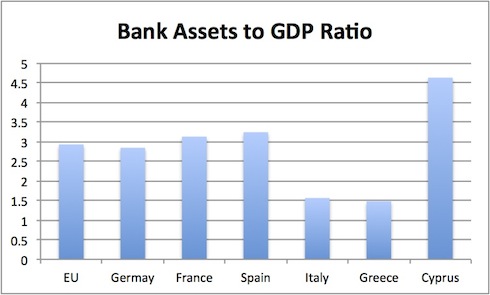 The Cyprus situation has been brewing for months, with Cyprus first formally requesting a bank bailout back in June 2012. The media largely ignored this development due to the country’s small size. By November 2012, Cyprus announced it had reached an informal agreement on the bailout terms, though the actual amount requested wouldn’t be formalized until Cyprus banks had been reviewed by the EU, ECB, and IMF.

Last weekend, Cyprus formalized the bailout amount at €10 billion (lower than the expected €17 billion). However, it lowered the amount by stating that it would raise €6+ billion itself by TAXING Cyprus savings accounts.

Words almost cannot describe the seriousness of this. Cyprus proposed to simply STEAL money from those with savings accounts in its banking system to help fund a bailout of its banks. The theft was presented as a “levy” or “tax,” but the act of confiscating someone’s property without permission is THEFT no matter how you word it.

Indeed, the very fact that this option was even considered, indicates several MAJOR issues. They are:

1)   During times of Crisis, personal property and common rule of law will be discarded if deemed necessary by the political and financial elites.

2)   Germany has reached the limit of its willingness to aid Europe.

3)   The IMF and ECB are essentially out of options and funds.

At this point, Europe is literally beginning to run out of options. It’s only a matter of time before the Crisis goes into hyperdrive and we have an event even worse than 2008.

In simple terms, this time around, when Europe goes down (and it will) it’s going to be bigger than anything we’ve seen in our lifetimes. And this time around, the world Central Banks are already leveraged to the hilt having spent virtually all of their dry powder propping up the markets for the last four years.

Given what is happening in Europe right now, we wanted to alert investors to a major development we’ve noticed in the markets.

The markets look to be setting up for the next Crisis. Indeed, multiple metrics we track are flashing RED ALERT.

To read more about this…