This move is looking to be largely based on institutional liquidation in Asia where Japanese bonds are being sold.

The Bank of Japan announced a massive $1.2 trillion QE effort on April 6. The move was lunacy given that Japan has already announced QE equal to over 20% of its GDP in the preceding years and GDP growth was still slowing.

According to Central Banker thinking, if something doesn’t work for 20 years the only answer is to do even more of it. So the Bank of Japan attempted a “shock and awe” move with an unprecedented QE equal to $1.2 trillion. Japanese bonds, already strained as investments by the demographic and economic issues plaguing Japan, have since become extremely volatile.

With this in mind, the move in Gold looks to be several large institutions liquidating positions to meet margin calls or redemptions due to the plunge in Japanese bonds. The technical damage to Gold has been severe. 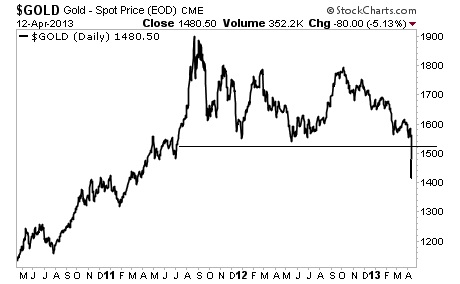 Another factor here is the slowdown in China. The post-2009 “recovery” has largely been driven by China’s growth. The People’s Republic reported GDP growth of 7.7% on expectations of 8% last week. This, combined with misses in retail and industrial production, doesn’t bode well for the global economy.

On that note, now is the time to be preparing for a potential bloodbath in the markets. Just looking around the globe we see China’s economy slowing, Japan’s bond bubble bursting, Gold crashing, and more.

We produced 72 straight winning trades (and not a SINGLE LOSER) during the first round of the EU Crisis. We’re now preparing for Japan’s onslaught.