Is Bernanke’s Worst Nightmare Just Around the Corner?

First off I want to say that all of us here at Phoenix Capital Research are sending our prayers to the victims of the Boston Terror Attacks. We sincerely hope none of you, our readers, or your loved ones were injured or harmed by these events.

The markets today are snapping back from yesterday’s sharp drop. However, in the bigger picture we believe that Ben Bernanke must be terrified.

The Fed and other Central banks of the world have done their darnedest to inflate away the debts of the developed world. These folks wanted more than anything to create inflation… because it meant it was easier to service their debt loads provided interest rates stayed low.

It is beginning to look like they failed. The Fed has announced QE 3 and QE 4, the Bank of Japan just announced a $1.2 trillion stimulus, the European Central Bank has promised unlimited bond buying… and yet deflation looks to be rearing its head again.

Copper has taken out its “recovery’ trendline. 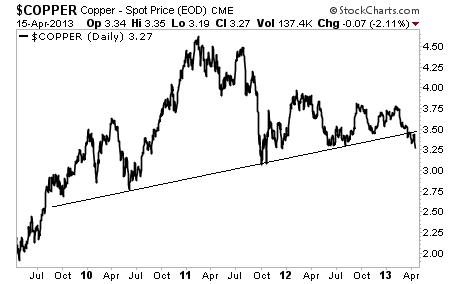 Oil is breaking down: 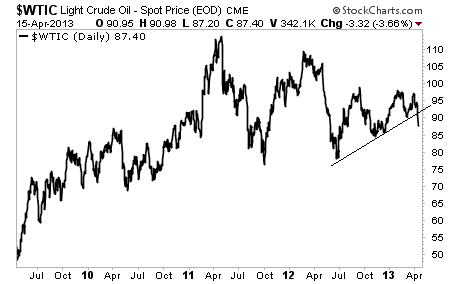 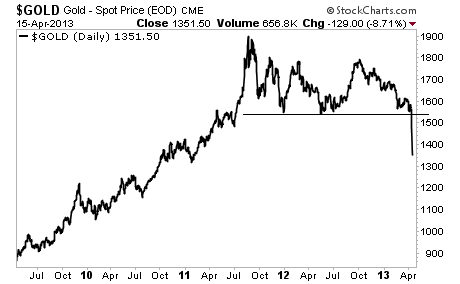 These are all signs of rising deflation. If deflation IS back then Bernanke’s efforts to create inflation will have failed. IF this is the case, the Fed is literally out of bullets.

Investors take note, the global economy appears to be contracting again. China’s recent GDP miss is the just the latest in a series of economic surprises to the downside.

And stocks are always the last asset class to realize this.