The markets moved higher yesterday because frankly Tuesday is the day for upside moves: thus far in 2013, we’ve had 13 straight Tuesday gains. This, combined with the very short-term oversold basis of several markets, mainly Gold and commodities, gave the “risk on” trade a bump.

From a technical perspective, the S&P 500 is in danger of breaking several critical trendlines: 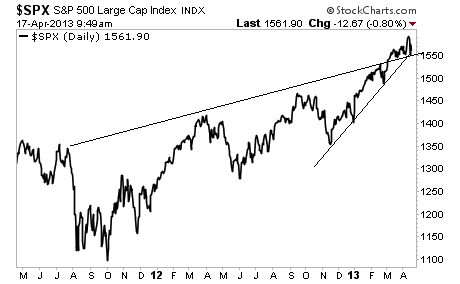 The rising wedge pattern is a consolidation pattern that can break either up or down. One of the trickiest issues is a “false breakout,” which occurs when the initial move out the pattern proves to be short-lived. False breakouts are usually followed by violent moves in the opposite direction as traders realize the initial move was false.

In today’s market, that direction would be down.

We get additional signs of trouble from Spain. It was Spain that nearly took down Europe last year. In this sense, the Spanish stock market, the Ibex, has become the proverbial “canary in the coalmine” for Europe. If the Ibex is rallying, investors believe Europe is alright. If the Ibex breaks down, then the European Crisis is back.

The Ibex has stalled and is in danger of breaking critical support: 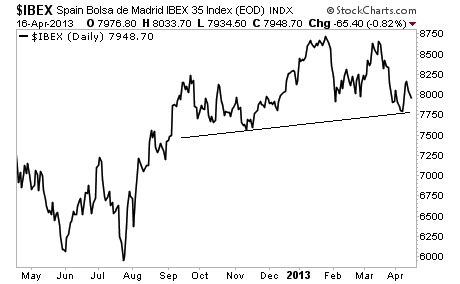 Final indications of trouble come from earnings. We’ve had a slew of corporations beating earnings guidance (which isn’t too difficult given how easy it is to manipulate profits) but missing revenues.

Coke, Goldman Sachs, Yahoo! all did this yesterday. They join Blackberry, US Bancorp, St Jude Medical and others.

Revenues are much harder to fudge than profits. They are more closely tied to the economy. So if revenues are missing estimates, it can be a warning that the economy is slowing.