We’ve been told countless times that Europe was “fixed.” The problem with this is that the market is beginning to realize this is not true.

Much of the European recovery counts on Germany. The ECB owns the printing presses… but without Germany’s support, the Euro is done for.

However Germans are only going to be supportive of the Euro up to a point. That point is when the German economy contracts enough that Germany has its own problems to deal with, rather than focusing on Europe’s.

That point appears to be approaching. Germany’s economy contracted in the fourth quarter of 2012. The country has since seen its credit rating downgraded to A from A+ by Egan Jones.

The German stock market, the DAX, has officially taken out its trendline from the June 2012 low when European Central Bank President Mario Draghi promised “unlimited bond buying” to support Europe. 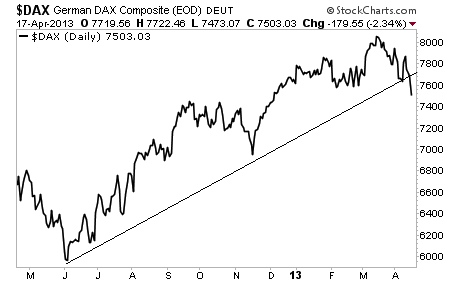 This is bad news for the rest of Europe. With Angela Merkel seeking re-election in September this year, Germany will be less likely to OK any more bailouts.

Europe better pray nothing goes wrong between now and then.

Watch the DAX and the Spanish Ibex. Spain as noted in Monday’s market commentary is the European canary in the coalmine. If it starts to drop… and the German DAX follows… then the contagion is back.