Are Stocks Heading the Same Way Gold Did?

The markets rallied hard yesterday, thanks to promises of more from Europe. However, the global economy is once again contracting with the bad data coming out of both China and Germany: two of the biggest exporters in the world.

With that in mind, the S&P 500 looks as though its initial jump to the upside from its rising wedge pattern could have been a false breakout: a move was not sustained. These developments are usually followed by VIOLENT swings in the opposite direction. 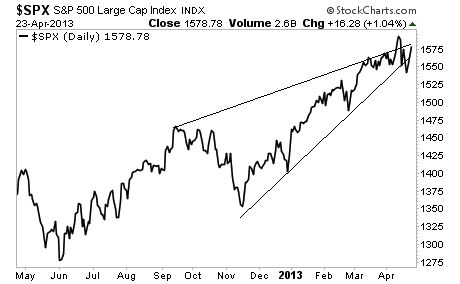 Indeed, Gold showed us how these developments work.  In mid-2012, it broke upwards from a falling wedge. A lot of traders, myself included, thought this would indicate new highs were on the horizon.

Instead, Gold languished and the breakout proved to be false. And when the reversal came, it was VIOLENT: 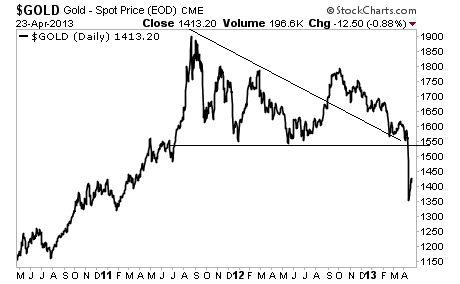 Investors take note, a false breakout is an extremely dangerous thing. If the stock market is in fact failing to maintain its upward breakout, we could see a sharp reversal similar to that of Gold (Gold has lead stocks for much of the post-2008 period).