The One Trendline To Watch For Gold

Since 2011, the Fed and other global Central Banks have injected over $2 trillion into the financial system. They’ve also announced plans to continue pumping money ad infinitum.

And yet for the period from 2011 until two weeks ago Gold, the inflation hedge of choice for investors, hasn’t done much of anything.

Part of it has to do with simple sentiment. Gold was overextended in 2011, stretched far away from its primary trendline: 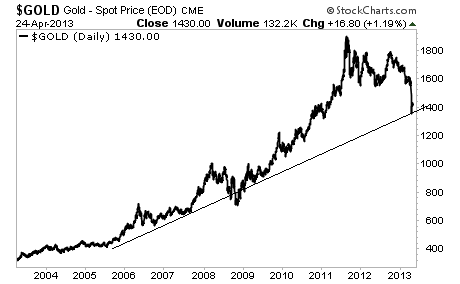 On top of this, investors had gone too carried away on expectations of more Fed liquidity. QE 2, which was announced November 2010, was a mere $600 billion (not much compared to the Fed’s current programs which will extend forever). But yet Gold rose like a rocket ship starting in August when the Fed first hinted at QE 2.

Which brings us to today. This excessive enthusiasm needed to cool and Gold has done just that for the last two years. Then the Gold Crash happened and were right back at the long-term trendline. 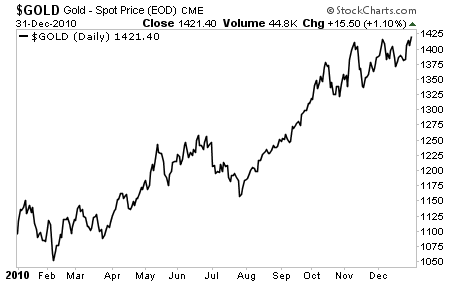 The is the key area to watch. If Gold continues to correct, then we could go to $1200. But Gold should hold up here.

On that note, I’ve just notified subscribers of my Private Wealth Advisory newsletter to five small cap gold plays all of which are trading just above their cash levels.

Put another way, at these valuations, you’re almost getting their gold reserves and mining equipment for FREE. Talk about a cheap deal!

As I write this, all five of them are UP in a big way. One has already soared 4% today alone!

To find out what they are, all you have to do is take out a trial subscription to my Private Wealth Advisory newsletter. You’ll immediately be given access to my Special Update on these gold plays… as well as FIVE Special Reports outlining some of the biggest risks to the financial system.

The “C” Word: the Dark Secret the Fed Wants Hidden

The Inflation Secrets Your Broker Won’t Tell You About

To take out a trial subscription to Private Wealth Advisory…