For the last four years, the financial world has traded largely based on hope of more intervention from Central Banks.

That was and is the single driving factor of the markets. Good news was good news (it’s a recovery!) but bad news was even better (the Fed will have to print more money!) as far as stocks were concerned.

However, against this backdrop several issues began to develop. The single most important one was Copper, which has a great record of anticipating real economic growth: 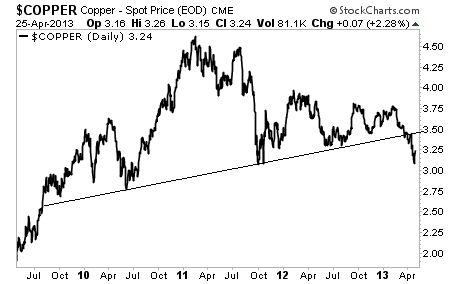 Note that Copper signified an end to the economic “recovery” story back in 2011. Since that time, it’s been in decline. In fact, it’s just taken out its “recovery’ trendline dating back to 2009.

This signifies that the world economy is slowing. It tells us point blank that things are not well in the world.

Just as importantly, it shows that the claims that QE and Central Bank money printing generate real economic growth are false.

Copper can’t fudge statistics to meet political agendas. It doesn’t lie under oath. It moves based on supply and demand. And demand has been falling since 2011.

Investors take note, the markets are sending multiple signals that things are not going well in the world. Copper is forecasting a nasty summer.