The markets are holding up based on hope for more stimulus from the Fed and ECB this week (Fed FOMC is Tuesday and Wednesday, the ECB meeting is on Thursday).

This is a very dangerous environment. We are entering the seasonal period in which stocks typically do poorly (May-November). Earnings guidance is falling. And even the massaged GDP number for 1Q13 was lower than expected.

In simple terms, we are getting multiple signs that the economy is slowing and heading towards recessionary territory. This is happening at the precise time that stocks are holding up on hopes of more stimulus. 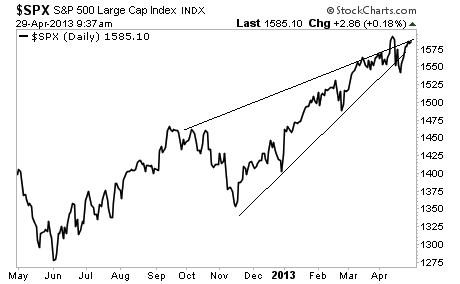 The rising bearish wedge pattern in the S&P 500 that we noted last week remains in play. It should be resolved this week. However, multiple economic bellweathers are already warning DANGER DANGER!

Below is a price performance chart for the S&P 500 against Fed EX (postage and shipping), Arcelor Mittal (steel), and Caterpillar (machinery). As you can see, the real economy is falling. But stocks keep holding up. 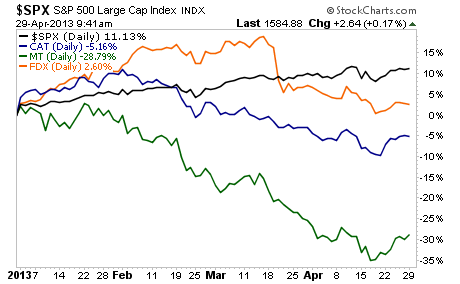 We’ve seen this kind of divergence between stocks and the economy before in 2008. We all know how that ended.

Investors take note, the markets are sending multiple signals that things are not going well in the world. Companies based on the real economy are dropping hard.