The Market is Now the Most OverBought In Four Years

Stocks are now beyond overbought. The market ramped on Tuesday (the 17th straight Tuesday rally by the way) because traders are now playing for Tuesday rallies.

The financial media is looking for any and all reasons to justify the move, but the fact is that the market had rallied for 16 straight Tuesdays before… so why not a 17th time?

Behind this backdrop things only worsen. The divergence between stocks and the economy is growing rapidly. Stocks are now over 4% above their 50-DMAs. Anytime stocks have been this far above their 50-DMAs in the last four years we’ve seen a correction: 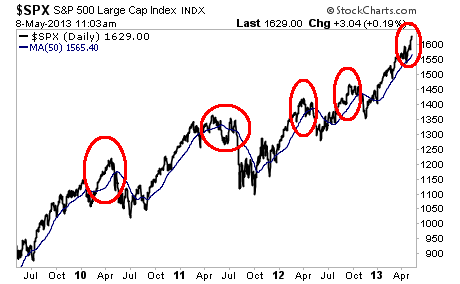 The overbought nature of the market is even more obvious when you compare the S&P 500 to its 200-DMA: 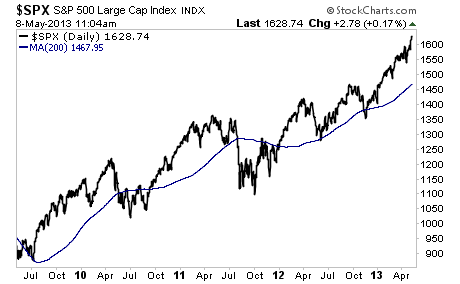 It is clear now we are in something of a blow off top. How long it will last is anyone’s guess, but investors are far too bullish given the fundamentals. The long, “risk on” trade is so lopsided it’s not even funny.

Maybe this time is different… maybe stocks will only go straight up forever. Maybe this bubble, unlike the last two, will not burst.

Or maybe it’s time to start prepping for the next stock collapse.

Investors take note, the market may be hitting new highs thanks to traders’ games, but the real economy is contracting sharply. This is precisely what happened during the market peaks before the Tech Crash and the 2008 Collapse.

We are getting precisely the same warnings this time around.