This Bubble Will be Even Worse Than 2008

Stocks are officially in a blow-off top. 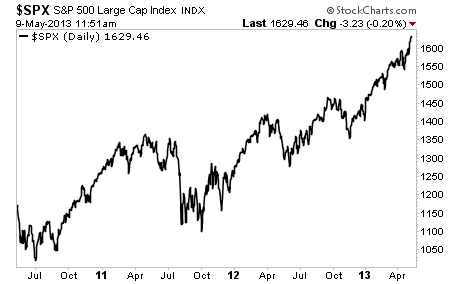 This is the culmination of Bernanke’s life’s work. In his mind he has succeeded in saving capitalism by spending trillions of Dollars pushing stocks higher.

All that matters is that stocks are up. That equals a recovery for the Fed.

This whole mess is sad really. Having seen two bubbles burst in the last 13 years, we all know how this ends: in disaster. And each time the disaster has been bigger. Indeed, the 2008 collapse was a far worse thing than the Tech Crash.

And what’s coming will be even worse than 2008. This time around, entire countries will go bust, not just banks.

On top of this, when this bubble bursts, interest rates will already be at zero and the Fed’s balance sheet swollen with garbage debts. The Fed and other Central Banks WON’T have the usual tools available to save the day.