It’s Official: Stocks Are In a Bubble

The markets are rallying because today is Tuesday. Stocks have rallied every Tuesday for the last 17 weeks and traders are now conditioned to play for this move. It’s also a POMO day (meaning the Fed is pumping the markets), which adds fuel to the fire for a stock rally.

The market is beyond overstretched. We have not had a 5% correction in six months. Stocks have gone almost straight up for 89 days (we haven’t had a 3+day correction in that long).  This is an all time record. The last time stocks rallied without a 3+ day correction was in the buildup to the Crash of 1987.

Check out the chart of Stocks vs. Copper. 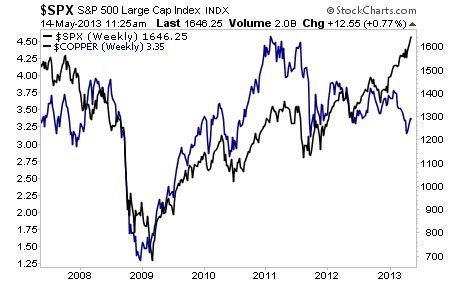 Copper is great at predicting economic growth. Stocks are not. And the major divergences between the two tend to be resolved sharply (notice the sharp correction in Copper in late 2011).

With that in mind, either Copper needs to ERUPT higher as the world economy comes roaring back… or stocks need to drop BIG TIME.

Guess which one it will be? Do you think this might have something to do with why Bernanke is worried about potential for “sharp moves” in the markets?

Between this, rampant insider selling (makes you wonder if the people running the companies know something about the economy the Fed is ignoring), the downturn in economic data in the US, and the ongoing disaster that is the US jobs market, the market is priced for a total collapse.