This Crisis Is 30 Times Bigger Than Greece

Japan has fueled much of this latest rally in stocks, driving the marketing first with promises of money printing by the Prime Minister in November 2012, and then a massive $1.2 trillion QE program announced by the Bank of Japan last month.

The result of this has been a collapse in the Yen and a 70%+ rally in the Nikkei in the last six months.

This has been the fundamental driver of this latest risk on rally. Remember that the US Federal Reserve has begun changing its language regarding QE and has even hinted at tapering QE before the year-end. So it’s the Bank of Japan who’s in the driver’s seat for asset prices today.

If Japan has been bad for the Yen and good for stocks… it’s been an absolute disaster for Japanese bonds. Since the Bank of Japan announced its latest QE program, Japanese Government bonds have triggered circuit breaks no less than four times due to incredible volatility.

And last week, they briefly violated their multi-year trendline. 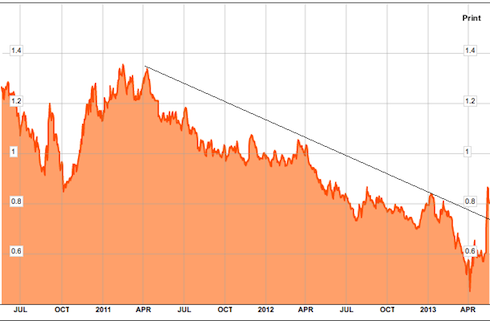 Many investors are probably looking at this chart and thinking, “who cares what happens to Japanese bonds… why does a trendline violation matter here?”

First and foremost, Japan is the second largest bond market in the world. If Japan’s sovereign bonds continue to fall, pushing rates higher, then there has been a tectonic shift in the global financial system. Remember the impact that Greece had on asset prices? Greece’s bond market is less than 3% of Japan’s in size.

For multiple decades, Japanese bonds have been considered “risk free.” As a result of this, investors have been willing to lend money to Japan at extremely low rates. This has allowed Japan’s economy, the second largest in the world, to putter along marginally.

So if Japanese bonds begin to implode, this means that:

1)   The second largest bond market in the world is entering a bear market (along with commensurate liquidations and redemptions by institutional investors around the globe).

2)   The second largest economy in the world will collapse (along with the impact on global exports).

Both of these are truly epic problems for the financial system. But even worse than any of them is the following

If Japan’s bond market implodes, then global Central Bank efforts to hold the system together will have proven a failure.

Japan is truly the leader amongst global Central Banks when it comes to progressive and accommodating policy. The Bank of Japan has kept interest rates at ZERO for nearly two decades. It’s also launched NINE QE plans adding up to an amount equal to nearly 25% of Japanese GDP. So far it’s managed to do this with minimal consequences.

Central Bankers around the world have monitored these efforts and believed that they can implement similar plans. So if Japan’s bond market begins to collapse, then it’s Game. Set. Match. for Central Banker policy. And what follows will make Lehman look like a joke.