We All Know How This Will End… Badly

Just what is the Fed so scared of?

Today, the Fed’s favorite reporter, Jon Hilsenrath at the Wall Street Journal published an article completely refuting his own work from just two weeks ago.

If you’ll recall, two weeks ago, Hilsenrath wrote that the Fed was planning to taper its QE purchases before the end of the year.

Today, Hilsenrath wrote that when the Fed does taper its buying  it won’t be “predictable.” So which one is it? And more importantly, with stocks hitting a new high almost every day, why is the Fed so alarmed about signaling an end to its massive monetary stimulus efforts?

After all, the first Hilsenrath article didn’t even put a dent in stocks. They’ve gone almost straight up since he wrote it on May 13. 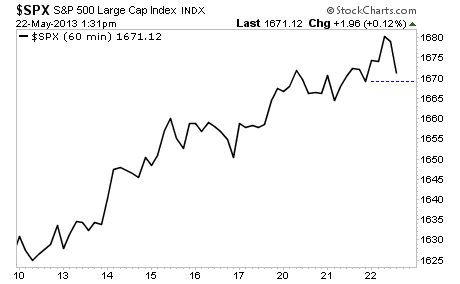 Could it be that the Fed is terrified that it’s created another bubble… a situation where stocks become completely disconnected from the economy?

After all, the S&P 500 is now diverging massively from Copper and Lumber, two very economically sensitive commodities. 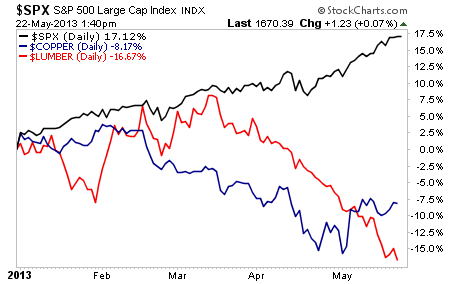 Ditto for the S&P 500 and Emerging Markets which have lead US stocks since the 2009 bottom. 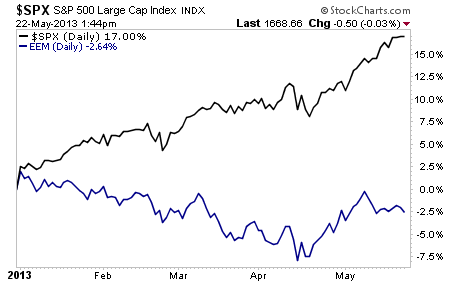 This is what the Fed is so afraid of… stocks are in a bubble and the underlying economy is terrible. We all know how these situations resolve: BADLY.

As I write this, all of them are SOARING. In fact we just locked in two gains of 28% and 21% in less than three weeks’ time yesterday.