The Fed would do well to look at Japan.

Japan’s Nikkei, after rallying over 70% since November, just collapsed 11% in less than two days. Looking at the chart, it’s pretty clear where this thing is heading: the same as the NASDAQ in 2000. 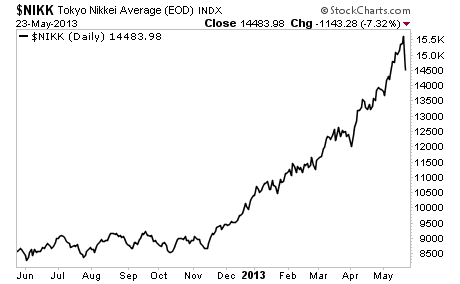 This is the problem with economic policy that focuses on pushing stocks higher: eventually the collapsing economy comes home to roost and stocks implode. We saw this in 2000 and 2008. We’re currently seeing it in Japan. And it’s only a matter of time before it his the US.

Indeed, Bernanke’s whole life work has been based on the belief that the Fed didn’t do enough during the Great Depression. So he’s opted to expand the Fed’s balance sheet to over $3 trillion and to monetize most of the US’s debt issuance via QE to battle the Financial Crisis.

Altogether, the Fed has monetized QE equal to 15% or so of the US’s GDP. Doing this has already put stocks back in a bubble and damaged the economy to no end. Marginal debt is back at record highs, housing has not bottomed, and Bernanke is still talking about a “recovery” FIVE years after the Crash. At this point based on the business cycle alone we should be in a roaring growth spurt.

QE doesn’t work. It never has. Look at Japan.

Japan has monetized an amount equal to well over 25% of its GDP via QE. And at that point its bond market began to crash. It’s not coincidence that the Fed is beginning to talk about tapering QE now that this is happening. Even a career academic can look at what’s going on in Japan and know that more QE won’t help the US.

So the Fed is essentially handcuffed at this point. Increasing QE in any way risks a Japan-bond market style rout.

Can you imagine what would happen if the financial system faces another Crisis? The Fed has already thrown everything including the kitchen sink at the system. If the system collapses now the Fed will be powerless to stop it.

Investors, take note… the financial system is sending us major warnings… If you are not already preparing for a potential market collapse, now is the time to be doing so.

As I write this, all of them are SOARING. In fact we just locked in two gains of 28% and 21% in less than three weeks’ time on Tuesday.