A few weeks ago, we noted that stocks looked to be posting a false breakout.

A false breakout occurs when the market breaks out of a technical formation in one direction then fails to follow through on the move. Looking at the rising wedge pattern in the S&P 500 this appears to be happening now: 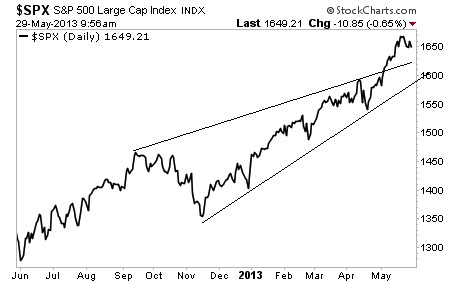 As you can see, stocks broke out of the rising wedge to the upside. However, this move looks to be rapidly losing steam. We’ve just seen a new lower high. And if the S&P 500 were to fall back below its upper trendline LOOK OUT: failed breakouts tend to resolve both quickly and violently.

Indeed if you look at stocks relative to Copper, there’s room for a REALLY bad correction here: 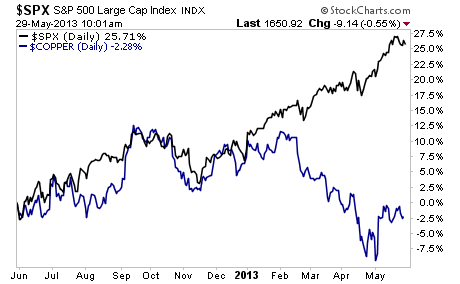 We’ve noted for some time that stocks had diverged sharply from the underlying economy. But this is a truly ugly chart. And if stocks ever begin to re-connect… it’s going to be BAD.