Friday’s Drop Was Just a Hint Of What’s Coming

The gaming of economic data continues in the US.

On Friday it was announced that consumer confidence hit its highest level in nearly six years. Indeed, the last time we saw confidence in the economy as this reading was July 2007…

Here’s a riddle… how can consumer confidence be so high when:

1)   Household wealth remains 45% lower than it was before the Crisis?

Technically we’re all poorer than we were before 2008 happened. Most of us are making less money. And we’re spending more just trying to get by thanks to higher food, energy, and healthcare prices. Heck, housing is now even soaring again, pricing most beginning home buyers out of the market.

And yet… supposedly we’re all feeling much better about things. Either we’re all delusional… or the data is being massaged to look better than reality.

Against this backdrop, Bernanke continues to talk about how removing stimulus could damage the “recovery.”

We’re five years into a financial crisis. The typical business cycle is 10 years. So just based on historical cycles alone we should be witnessing a roaring recovery by now. And yet, the Fed Chairman is worried that removing stimulus (which is now north of $85 billion by the way) would damage the “recovery.”

Folks this entire mess is one big house of cards that is getting ready to collapse again. The Fed doesn’t have an exit plan. It never had a plan to begin with except to leave the paperweight on the “print” button. The fact that they’re still talking about a recovery five years and $2+ trillion after the Crisis hit makes it clear they’re losing control.

The market is beginning to sense this as Friday’s collapse indicates. As I’ve stated many times in the past weeks, stocks were ready to correct. Friday we got a hint of what’s coming: 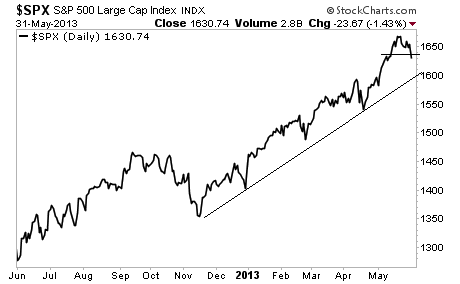 Investors take note… now is the time to be prepping for a market correction. As Friday’s action showed, when it comes, it’s going to be fast and violent.