It’s Official, the US is Back in Recession

As warned previously on these pages, the US is in a recession… again.

The latest ISM reading came in at 49. Any reading below 50 is considered recessionary. And an ISM of 49 is the worst in four years.

The Fed, as usual, is oblivious to this. Bernanke claims we’re going to see a 3% GDP growth in 2014. We haven’t seen annual GDP growth of 3% since Bernanke took office. And he and the Fed have been claiming that a recovery was just around the corner for five years now… that’s HALF a business cycle.

At this point we should ALREADY be in a massive economic expansion, not waiting on a recovery. And we certainly shouldn’t be seeing weak growth and higher costs, which is the worst possible combination: stagflation.

Indeed, Copper, the commodity with a PhD in economics, peaked two years ago implying that economic growth has been slowing ever since. This hardly gives any credence to Bernanke’s claims. If anything, it shows that the man is not paying any attention to obvious signs from the world that growth is slowing. 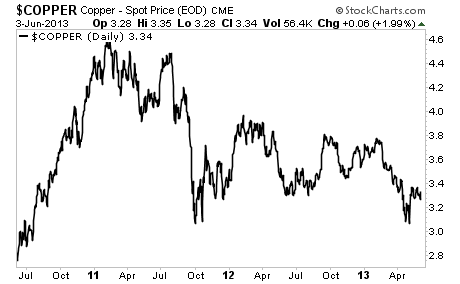 As I told Private Wealth Advisory subscribers over a month ago, if you remove the Fed’s phony inflation measure and measure GDP in nominal terms, it’s clear we’re already back in a recession: 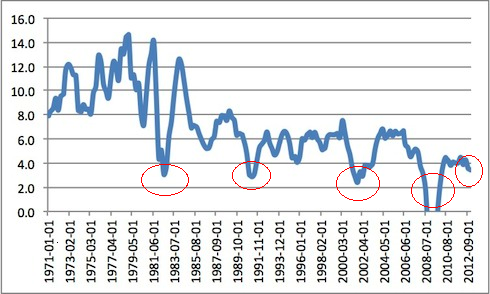 And stocks are at all time highs? Buckle up, what’s coming is not going to be pretty.