What Happens When the Market Loses Life Support?

Stocks are on borrowed time.

The single item that has driven stock prices over the last four plus years (since the 2008 Crash) has been the Fed’s expansion of its balance sheet. David Rosenberg of Gluskin Sheff, depicted this fact beautifully in the chart below: 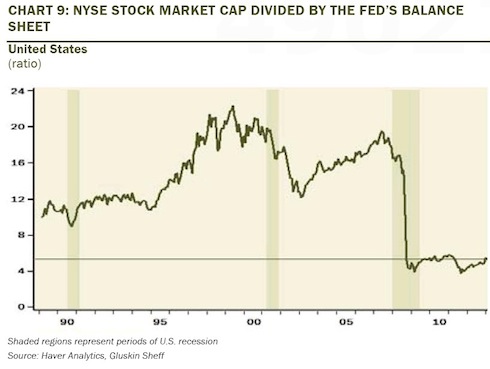 In plain terms, this chart shows us the Fed is driving stock prices. Virtually every dollar increase in the Fed’s balance sheet has resulted in stock market gains. Take away Fed stimulus and the market would be right back where it was in 2009: with the S&P 500 in the 600-700 range.

Thus, you can safely and factually say that the stock market is on life support from the Fed. Which is why any indication that the Fed will taper its QE program could result in a stock market crash.

The Fed tried hinting at tapering a month or so ago via a placed article at the Wall Street Journal. Everyone got into a panic and Bernanke and his pals quickly went into damage control mode assuring investors that QE could last forever.

Now the talk of QE tapering is spreading. Yesterday Steve Liesman on CNBC (another media personality with close ties to the Fed) stated that the Fed was having internal discussions about the effectiveness of QE.

It is now clear that the Fed is trying to prepare the markets for a withdrawal or tapering of QE. Judging from yesterday’s sell off (yesterday was the FIRST down Tuesday this year), the market is beginning to realize that the party won’t be lasting much longer.

Given that ALL of the stock market gains since 2008 were based on Fed money printing… what do you think will happen when the Fed tries to taper QE?