Anyone looking for clues as to what’s coming our way in the markets need only look to Japan where the QE forever policy has finally hit the wall.

Prior to the Prime Minister elections in September 2012, the Bank of Japan had already launched EIGHT QE efforts equal to over 20% of Japan’s GDP.

Throughout this period of money printing, Japan’s rate of GDP growth fell while its unemployment rate barely budged. There was little if any evidence that QE had accomplished anything.

However, this didn’t deter Prime Minister candidate Shinzo Abe from believing that QE was the answer to Japan’s woes. Abe ran on a platform of aggressive monetary expansion. As soon as he was elected he began promising to get the Bank of Japan’s money printers to work. The Japanese stock market, the Nikkei, took the hint and erupted higher, rallying over 70% in less than six months.

Sure enough, in April 2013, the Bank of Japan announced a massive $1.4 trillion QE program (equal to another 24% of Japan’s GDP). And the Nikkei experienced one last blow off top before collapsing: 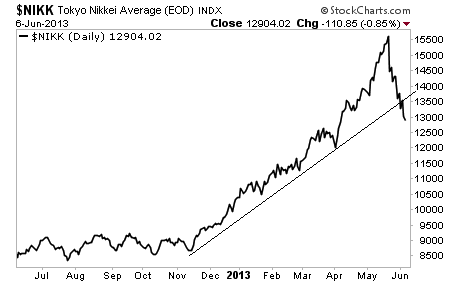 In a matter of weeks, the Nikkei erased all of its post-QE gains, taking out its critical trendline and entering a bear market.

This is how market bubbles burst: the market enters a blow off top and then implodes violently, taking out all of its gains in a fraction of the time it took to create them.

This is coming our way, whether investors like it or not. The signs are all in place with the economy weakening, corporate profits set to fall, multiple Hindenberg omens and more.