“Somebody” Bought Stocks on Thursday Because “Somebody” is Terrified

“Somebody” moved in to support stocks last week on Thursday.

The 50-DMA has become the “line in the sand” on the S&P 500. Anytime the market has come close to breaching this level in the last few months, “someone” has stepped in and propped the market up. 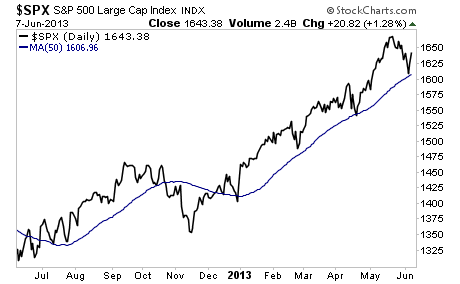 It’s pretty clear who the “someone” is. Given that the Fed is openly citing the stock market as an indication that QE is working… and given that every other metric shows QE is a total failure…

With that in mind, last Thursday’s action and the follow through Friday should be seen as a clear intervention.

This will end very very badly.

All of the signs are in place: the market has become a complete bubble. When you compare the market to its fundamentals, it’s arguably an even worse than the bubble that brought about the 2008 collapse.

Take a look at the divergence between stocks and Copper. Stocks could fall over 20% before they’d realign. 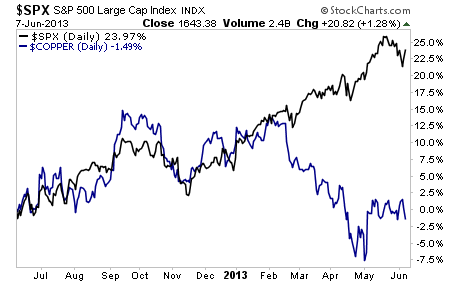