Did the ECB Mega Bailout Just Hit the Wall?

Few analysts know or admit it, but the only thing that held Europe (and ultimately the financial system) together since May 2012 was the promise of unlimited bond purchases from the ECB.

The reason this worked was because traders poured into European bonds in an effort to front run the coming ECB purchases (much as they have done with Treasuries during every new QE plan in the US).

This in turn became a self-fulfilling prophecy as European bond yields fell which induced more buying… which resulted in politicians proclaiming that the EU Crisis was “over.”

However, none of the structural issues in Europe were solved in any way. And now we’re getting to the details of the ECB’s proposed plan. And they are… nothing. The ECB is asking Germany’s constitutional court to “OK” a plan to buy whatever the ECB wants…without providing any legal details around the deal.

Why is this? How can you ask for unlimited funds without providing any details? Even a mortgage requires contracts. Surely an unlimited bond-buying program would require mountains of documents?

The fact of the matter is that the ECB knows there is no such thing as “unlimited” buying. At some point the bond markets will reject intervention (much as they are in Japan today).

Instead, the ECB used the term “unlimited” because it wanted investors to “imagine” that everything was solved. But Europe doesn’t have much money.

Indeed, Germany initially was going to set the program’s limit at a little over €500 billion… that sounds like a lot, but when you consider that the EU sovereign bond market is over €11 TRILLION and growing monthly, this will only go so far.

Put another way, the entire “unlimited” promise by the ECB was a bluff. The markets are beginning to figure this out which is why Europe is heading back into Crisis.

Take a look at Spanish bank Santander: we have a series of lower highs since the peak in January 2013. Whenever we take out the trendline it’s game over. 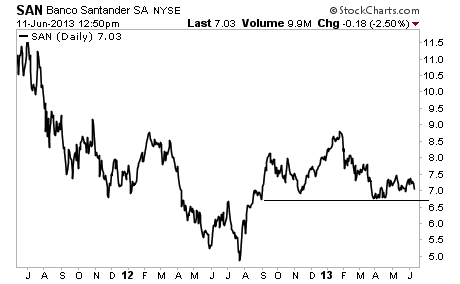 Check out the Head and Shoulders forming in Italian bank Intesa Sanpaolo: 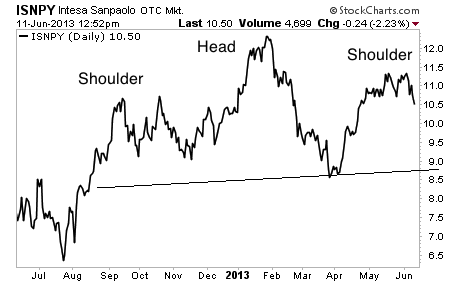 If you’re looking for investment strategies on how to play this mess, you simply cannot do better than my Private Wealth Advisory newsletter. During the first round of the EU Crisis, we locked in 72 STRAIGHT winners and NOT ONE single loser over a 12 month period.

And we’re doing this with ETFs and stocks… nothing fancy… just expert stock picking and market timing.