The Two Charts That Have Central Bankers Terrified

Japan continues to implode. We’ve now taken out the trendline that supported this rally since November. 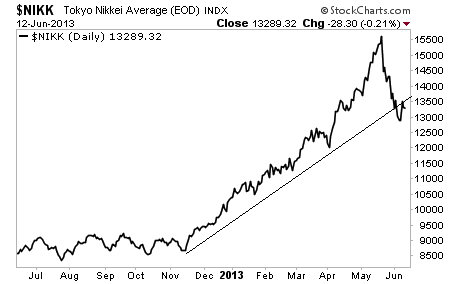 Not a pretty chart. Certainly not a pretty chart for Central Bankers, who believe QE can drive stocks only up. After all, Japan’s Nikkei is in a bear market only two months after the Bank of Japan announced a record QE.

Speaking of trendlines, the S&P 500 is on the ledge of a cliff. Bernanke bought six months’ of market gains with QE 4. Now he’s got a bubble on his hands. And if he even hints at tapering QE at next week’s Fed meeting, the markets could implode. 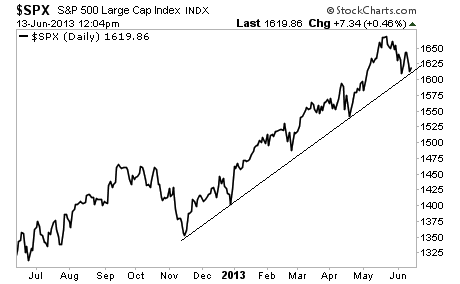 Investors take note, the markets are sending us MAJOR warning signals. Indeed, I don’t remember seeing this many signs of a major top since 2007/2008.

We all know how that ended.