Can Bernanke Keep the Rally Going?

The markets are rallying today because Bernanke and the Fed meet on Wednesday and will announce their new policies (if any).

Someone might want to explain to them that the Nikkei just collapsed in spite of Central Bank policy. The bank of Japan announced it would buy $1.4 trillion worth of assets (roughly 25% of Japan’s GDP) in early April. The Nikkei has already wiped out almost all of the gains since that time. 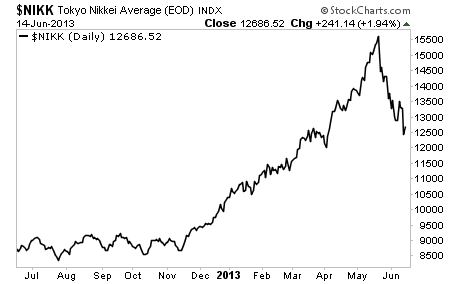 Still, US bulls continue to hope that Bernanke will engage in even more QE, despite the fact the Fed has an $85 billion per month QE policy in place already, which comes to over $1 trillion in QE per year.

Given that the Fed’s balance sheet is already over $3 trillion and will be over $4 trillion within 12 months, one has to wonder just what Bernanke can do. His best bet is to retire in January and let someone else try and manage the mess he created.

So let’s see what happens on Wednesday. The markets will likely rally until then on hopes of more juice from Bernanke. But if he should disappoint at all (read: not announce something more or at least strongly hint at doing so) then buckle up.