The Bond Implosion Has Officially Begun

The QE Infinite parade officially ended yesterday when Bernanke hinted at tapering QE later this year or in mid-2014.

I first warned Private Wealth Advisory subscribers about this in mid-May writing,

If Bernanke is going to step down (as hinted by his decision to skip out on the Jackson Hole meeting) he’s not going to want to leave with the Fed going at QE 3 and QE 4 full throttle.

Instead his best bet would be to take his foot off the gas a little bit, giving his replacement a little room to maneuver if things get ugly.

This is precisely what Bernanke is trying to do. However, there is another far larger issue at work here.

The primary driver of stocks for the last four years has been the hope of more Fed stimulus. This hope has put a floor under ALL asset prices as market participants KNEW the Fed was involved in the markets. As a result EVERYTHING (stocks, bond commodities, even currencies) has been artificially propped.

By calling for the end to QE 3 and QE 4, the Fed has begun to remove these market props. Which means that the markets are now going to start adjusting to where assets prices REALLY SHOULD BE.

Take a look at the spike in the 10-year Treasury yield: 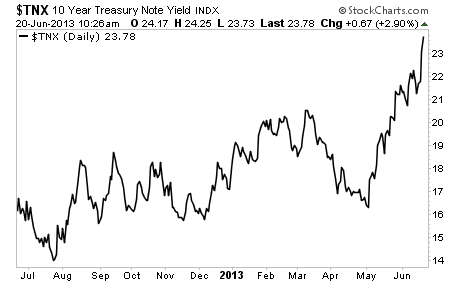