China’s “Lehman” Moment Could Bring About Another 2008

The global Central Banks are in damage control mode.

The big story here is China, which is fast approaching its “Lehman” moment with interbank liquidity drying up rapidly and overnight rates are soaring.

As I’ve warned Private Wealth Advisory subscribers before, China’s shadow banking system equal to over $18 trillion (more than 200% of China’s GDP), so this could be the mother of all bubbles bursting.

Indeed, China’s stock market has now fallen 20% and is in a free fall. 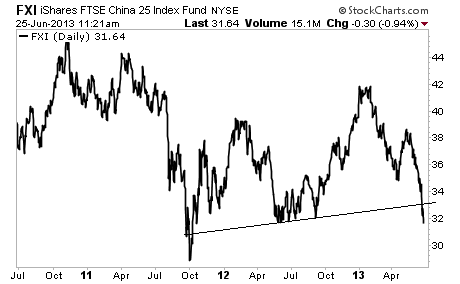 The Central Bank of China spoke yesterday to assure the market that there was ample “liquidity” in the system. But the market isn’t buying it. Smart investors shouldn’t either.

In the US, two Fed Presidents (Fisher and Kocherlakota) engaged in verbal intervention yesterday, trying to convince investors that the market misinterpreted Ben Bernanke last week when he said the Fed could taper QE by late 2013 or the middle of 2014.

There isn’t much to interpret here. The Fed has failed miserably to generate economic growth of any significance. All it’s done is create a stock market bubble while draining high quality collateral from the system. Put another way, it’s created a situation in which leverage is even worse today than it was before 2008. 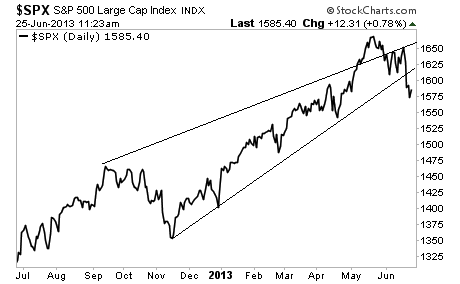 Bernanke knows this and is desperately trying to let the bubble down easily without it bursting. This is impossible. And as the bond and stock market action of the last week shows us, the very second the Fed backs off the system is at risk.

We produced 72 straight winning trades (and not a SINGLE LOSER) during the first round of the EU Crisis. We’re now preparing for more carnage in the markets… having just started another eight trade winning streak…