The markets continue their dead cat bounce while the economic data worsens.

First quarter US GDP was revised down from an annual rate of 2.4% to 1.8%.  The drop was due to lower personal consumption expenditures than initially forecast.

This is the crux of the US’s current economic woes: consumer-spending accounts for roughly 70% of our GDP. And QE does nothing to help incomes, which drive consumption.

The US Federal Government has subsidized a weak economic recovery via food stamps and other social program, but the private sector is lagging with most of its hiring coming in the form of temporary or part-time jobs.

The Wall Street Journal ran this graphic yesterday. Anyone who is banking on consumers to continue spending as they have is out of their mind. I’ve been warning Private Wealth Advisory subscribers of this for weeks. 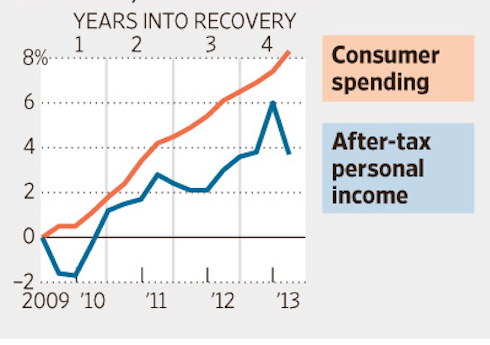 Regarding the stock market, it’s important to note that all market collapses follow a similar pattern of: 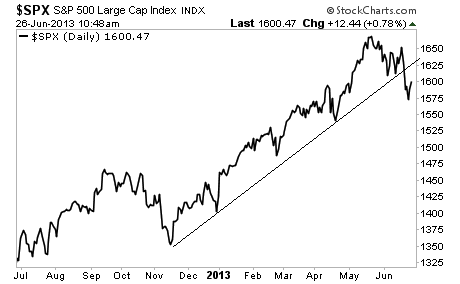 This move could take us as high as 1,625. However, if the market fails to reclaim its trendline we’re going down as far as 1,500 in short notice. And if we take out that level we’re in BIG TROUBLE.

As I write this, all of them are SOARING. In fact we just locked in four straight gains of 8%, 12%, 21% and 28% in the last month ALONE. In fact we just closed another yesterday bringing our new winning streak to NINE trades.