The biggest single most important item in the GDP report yesterday was the collapse in disposable income for Americans.

Most investors will focus on the drop in GDP growth for 1Q13 and view it as opening the door for the Fed to continue with QE 3 and QE 4 without any tapering in sight.

After all, the markets have believed that bad economic news is good news for the markets for four years based on the belief that a weak economy will mean more money printing from the Fed.

However, the real issue in the BEA’s report on GDP growth was the collapse in real per capita disposable income which fell at a annualized rate of 9.21%.

That is a truly staggering collapse in incomes. The last time we say anything even close to this was in the third quarter of 2008.

That was right after Lehman failed and the entire economy and stock market were melting down. Buckle up, things are getting worse in the US at a truly alarming rate.

I’ve been warning subscribers of Private Wealth Advisory that the economy was going to turn sharply weaker this year. It’s already begun.

Indeed, while most investors will look at the GDP report as indicating more QE is coming, commodities certainly didn’t get that signal at all. The commodity index continues to plunge diverging wildly from the S&P 500. 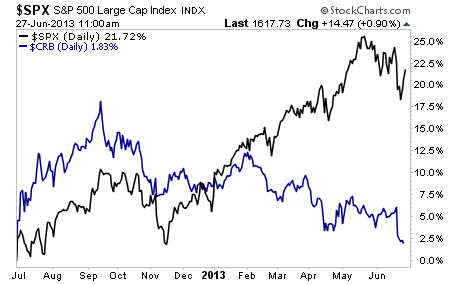 One of these asset classes is completely mispricing the economy and the likelihood of more QE. Guess which one it is.

As I write this, all of them are SOARING. In fact we just locked in four straight gains of 8%, 12%, 21% and 28% in the last month ALONE. In fact we just closed another yesterday bringing our new winning streak to NINE trades.