Today should be the peak of end of the quarter performance gaming.

Stocks have rallied hard for three days. The financial media has seen this as indicating the worst is over. But the fact of the matter is that most of this is performance gaming aided by various Fed officials issue verbal interventions yesterday.

As I’ve noted to Private Wealth Advisory subscribers, there’s a historical pattern here: stocks tend to lead summer rallies into the Fourth of July. With that in mind, the technical pattern we noted earlier this morning remains in play with the S&P 500 rallying to retest support. 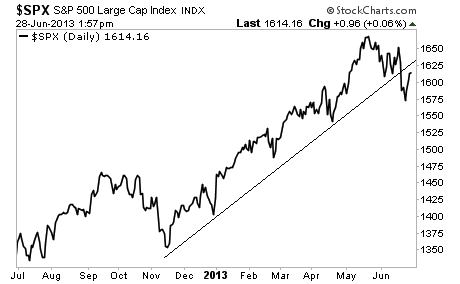 As noted on Wednesday, market collapses follow a particular pattern:

As noted on Wednesday, the S&P 500 has completed #1 and is now in #2. I expect the markets will hold up into next week. But at that point we’ll be primed for a serious collapse.

As I write this, all of them are SOARING (one is up 12% this today alone). In fact we just closed another yesterday bringing our new winning streak to NINE trades.