Can We Retake the Trendline?

As noted last week, the markets will likely rally into the Fourth of July. Most “analysts” will view this as a sign that the initial drop down from two weeks ago was a fluke and it’s time to “buy the dip.”

However this move was to be expected based on technical formations alone. As I noted last week,

This move could take us as high as 1,625. However, if the market fails to reclaim its trendline we’re going down as far as 1,500 in short notice. And if we take out that level we’re in BIG TROUBLE.

Watch the below line. If we can’t get above it, we’re going DOWN fast. 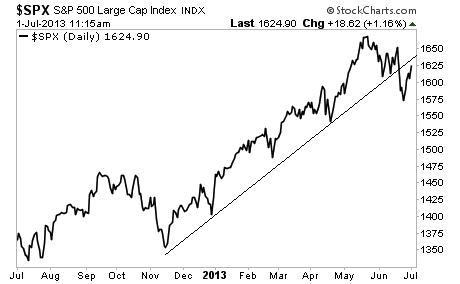 There’s no shortage of reasons…

For starters, Japan’s economy is imploding, despite a record QE in place: domestic car sales plunged 15% from the year before.  So much for the view that the economy was improving courtesy of Japan announcing its NINTH QE effort equal to over 20% of its GDP.

In Europe, the powers that be have decided to make what happened in Cyprus (steal people’s money to fund a bailout) the template for all banking crises going forward. Anyone with an iota of common sense knows is going to lead to banking runs… which in a banking system with leverage at 26-to-1 is that last thing Europe needs.

And then there’s the US where GDP growth was revised SHARPLY lower due to a drop in consumer spending. Consumer spending accounts for 70% of GDP in the US. Guess how this will play out going forward?

As I write this, all of them are SOARING (one is up 12% this today alone). In fact we just closed another yesterday bringing our new winning streak to NINE trades.