Has the Next Leg Down Begun?

Well we got right to the trendline noted in earlier articles. We’re now beginning to roll over as we predicted. 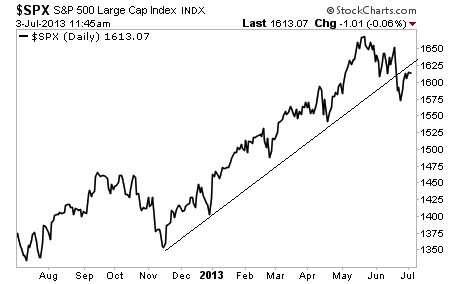 The number of major problems hitting the system right now is truly staggering. Off the cuff I note:

1)   Egypt falling into governmental collapse and a possible coup.

4)   Multiple indicators flashing “recession” for the US.

6)   EU back in crisis mode with both Portugal and Greece facing another round of collapse (with Spain and Italy waiting in the wings).

And those are just the major headline grabbing issues. Those banking on the market rallying even harder have got a lot of obstacles to overcome.