The One Chart That Proves We’re Not in a “Recovery”

The US economy continues to fall to pieces, though accounting gimmicks make our employment numbers look better than reality.

As I’ve alerted subscribers of our Private Wealth Advisory newsletter, most of the new “jobs” being created are part-time, not full time positions. Indeed, we’ve added over 500,000 part-time jobs to the US economy in 2013 so far. An incredible 360,000 of this came last month. And all in all we’ve now got a record 28+ million people working part-time in the US.

As for full-time jobs, well, we LOST 240,000 last month. And despite all the rhetoric coming out of Washington about a “recovery,” we’ve actually only added 130,000 in 2013 so far. To put this into perspective, we need to create at least 90,000 new full-time jobs PER MONTH to maintain employment levels based on population growth. 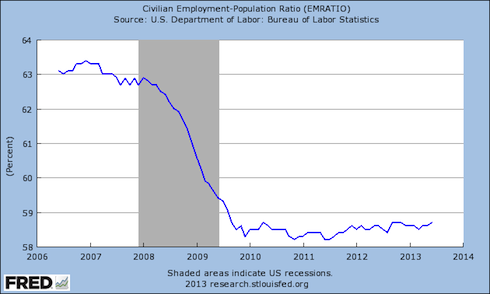 This is the #1 reason all the talk of “recovery” and “jobs growth” is totally bogus. If you are willing to fudge numbers and adjust measurements, then sure, things look much better. But the reality is that since 2009, there hasn’t been anywhere NEAR the job growth needed to claim we’re in a recovery.

With that in mind, the US stock market has rallied to retest its former trendline. This is a classic breakdown pattern. If we do not reclaim this line and go to new highs then the markets are set for a sharp decline, like to 1,550 if not more. And if you account for where stocks should be based on bonds, the S&P 500 should be down near 1,200. 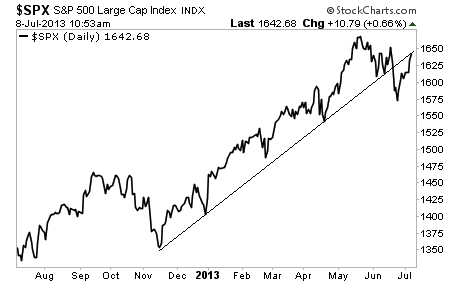 I warned Private Wealth Advisory subscribers in our most recent issue that the stock market was on borrowed time. The markets tend to stage summer rallies into the Fourth of July weekend, but with interest rates rising and the bond bubble beginning to burst, things are going to get much worse in a hurry.