The Economic “Miracle” Has Failed… What’s Next For the Markets?

China, which the investment world blindly continues to believe will power the global economy to growth, just posted its single worst export data since 2009.

All in all, Chinese exports fell 3.1% from a year earlier. Analysts had forecast growth of 3.7%. The reason? They continue to believe China will somehow pull a rabbit out of a hat and grow exports at a time when the global economy is sharply contracting.

Let’s look at the facts here.

In the last six months, China has pumped roughly $1.6 trillion in new credit (that’s 21% of GDP) into its economy. Despite this incredible monetary expansion, Chinese GDP growth is slowing.

Mind you, this slowing growth is occurring even after China massages the heck out of its GDP data. As I recently told my Private Wealth Advisory subscribers, when you look at electrical usage by the People’s Republic, real GDP growth is likely just 2.9%.

This is truly astounding: a country has expanded its credit by 21% of GDP in just six months and is barely able to generate positive GDP growth. Small wonder that the Chinese stock market has taken out its post-2009 trendline. 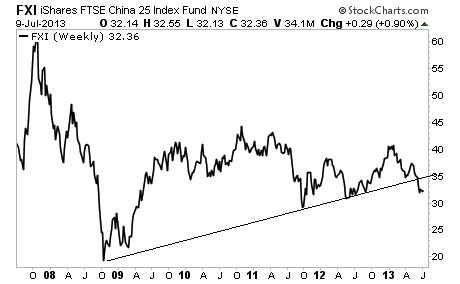 China is giving us a taste of what will be spreading throughout the global economy: a collapse in spite of massive monetary expansion. The entire “recovery” since 2009 has been based Central banks pushing money into the financial system… which did little more than allow corporations to borrow even more debt.

Indeed, globally the leverage in the financial system today is as bad if not worse than it was going into the 2008 Crash. Can you imagine what would happen if we suffered another collapse now, when Central Banks are already pumping their brains out trying to push market higher?

On that note, NOW is the time to prepare for another stock market bloodbath BEFORE this happens.