Bernank’s Bluff and the Coming Crash

Yesterday’s move confirms what everyone suspected, that Ben Bernanke is more of a CNBC stock market cheerleader than a Fed Chairman or businessman. Is there really any other interpretation for his clear and obvious verbal intervention in the stock market? Can we really look at his actions and say that this is a man who legitimately knows what he is doing?

After all, Bernanke did not actually introduce any new policies. His Fed is torn about how to proceed with half of the Fed Board wanting to end QE by the end of 2013. And yet Bernanke felt the need to speak after the market closed about how he will keep the money printers going ad infinitum.

The move is very reminiscent of the 2007 top where we had a top, a brief collapse and then a final burst higher to a new high. Within a few months however, the markets had begun to descend into what would ultimately be the worst Crisis in 100 years. 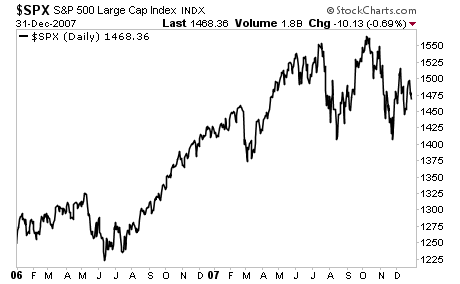 Indeed, it is almost impossible to make the case that stocks are starting another major move up here. We have, in no certain order:

1)   A collapse in corporate earnings

3)   The European banking crisis back

Against this backdrop, stocks are undoubtedly in a bubble.  Today, the S&P 500 is sitting a full 30% above its200-weekly moving average. We have NEVER been this overextended above this line at any point in the last 20 years.

Indeed, if you compare where the S&P 500 is relative to this line, we’re even MORE overbought that we were going into the 2007 peak at the top of the housing bubble.

This time will be no different. The last time a major bubble of these proportions burst, we fell to break through this line in a matter of weeks.

We then plunged into one of the worst market Crashes of all time.

With that in mind, I’ve already urged my Private WealthAdvisory clients to start prepping. We’ve opened six targeted trades to profit from the stock bubble bursting.