Bernanke Has Created a $4 Trillion a Day Ticking Time Bomb

The entire move last week was the result of Ben Bernanke waffling about when to taper QE (if ever).

The Fed hinted at tapering QE a mere two months ago. We now know that half of the Fed’s Board of Governors want QE tapered or even stopped entirely by the end of the year.

And yet, for some reason Bernanke cannot bring himself to even consider this, as he stated on Wednesday (after the market closed of course) that a “highly accommodative policy,” would be needed for some time.

Stocks hit a new high on the announcement. 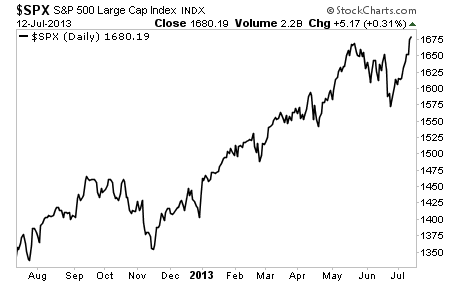 However, the big story about Bernanke’s statement was the effect it had on the US Dollar.

Bernanke’s comments absolutely slammed the Dollar. Why is this important? Because the currency market is the largest most liquid market in the world trading volumes of over $4 trillion per day. 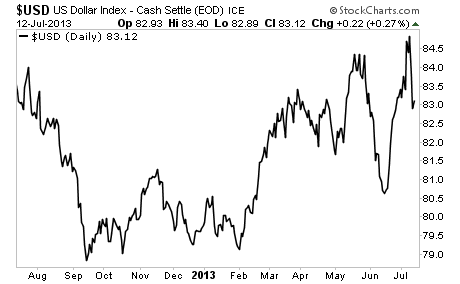 Wild price swings in a market of this size (that is often leveraged at 80 to 1 or even 100 to 1) mean massive amounts of wealth evaporating instantly. Historically, currencies are the first asset class to register when the system is in big trouble. These wild swings in the US Dollar are a major red flag that trouble is beginning to brew behind the scenes in the financial system.