Today marks the final day of Bernanke’s testimony to Congress.

Highlights from the first day of testimony and Q&A include:

Q: Are You Printing Money?

Amazingly, no one said anything after this comment. But far more importantly was the last statement made by the Fed Chairman,

“If we were to tighten (monetary) policy, the economy would tank.”

Unfortunately for Ben, rates are already rising around the world. Rates on Portugal’s ten-year are over 7%. Rates on Greece’s ten-year are back over 10%. Japan, the country of zero interest rates has seen a spike in its rates since April. Even Treasuries are surging higher, despite the Fed buying $45 billion worth of them every month. 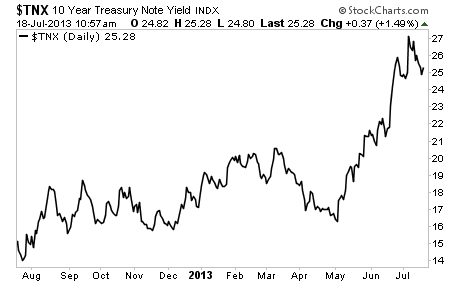 Bernanke has told us point blank what will happen if rates rise (economic collapse). But he’s not telling us the whole truth. The fact of the matter is that if rates rise now while the Fed is running QE 3 and QE 4 then it’s game over. The Fed will have officially lost control of the system and a wave of defaults will implode the markets.

This process has already begun. As I noted before we’re seeing rates spiking around the world.