The markets are running out of steam as there is no longer a Bernanke talk to look forward to (he won’t be at the Fed’s Jackson Hole meeting in August) and options expiration is ending.

Bernanke has a thing for options. For some reason, over the last five years, he had a tendency to expand the Fed’s balance sheet on weeks when options were expiring. He even did this on weeks when the Fed technically was not engaged in a QE program.

In simple terms, whenever it’s time for options to expire, a time when Wall Street wants to manipulate the markets so it can shred options traders, Bernanke will juice the markets EVEN if there is no formal Fed program in place.

So it’s a little hard to stomach that Bernanke just happened to say that QE would continue for some time the week before options expiration week… especially given that the Fed is so divided on QE with half of Fed members wanting QE completely stopped by the end of 2013.

Bottomline: the Chairman went rogue and did it at the precise time when stocks were in need of a major boost. This is not coincidence. And now that this is over we have to wonder what’s next.

Well among other things we see that IBM, Intel, eBay, Google, Microsoft, Blackberry have all missed revenue estimates. US GDP is turning sharply south again with the second quarter currently posting 1.2% growth.

Stocks are diverging from everything under the sun: earnings, US GDP, the Nikkei, the list goes on and on.

And we are clearly in a bubble. Arguably the biggest stock bubble for the S&P 500 in the last 30 years. Below is a weekly chart of the S&P 500 relative to its 200-week moving average. 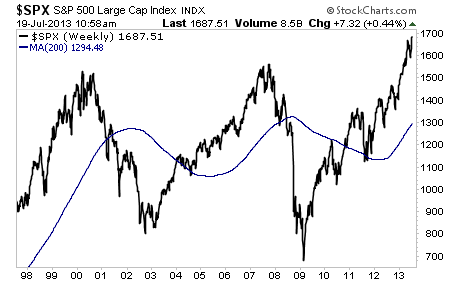