The Black Swan No One is Talking About

Another “growth story” is dying before our very eyes.

As I’ve warned Private Wealth Advisory subscribers, China is rapidly approaching ZERO growth. This is not less growth, but ZERO growth as in full-scale economic collapse from the days of 12% GDP growth per year.

Over 95% of “analysts” are missing this, but it is a fact. If you ignore the ridiculous GDP numbers (which even China’s Premiere has admitted are a joke in the past) and look at more accurate metrics, it’s clear China is collapsing at an alarming rate. Case in point, Electrical consumption rose by just 2.9% in the first quarter of this year.

How on earth can you generate GDP growth of 7% when you electrical consumption is rising by just 2.9% is beyond me. And when you consider that China is experiencing this weak growth despite having pumped over $1 trillion into its economy in the same quarter (an amount equal to 14% of China’s total GDP) you begin to understand the scale at which things are imploding in the People’s Republic.

Check out the chart for China’s stock market: we’re about to take out the post-2009 “recovery” trendline. And this is while China is pumping trillions in new credit into its economy! 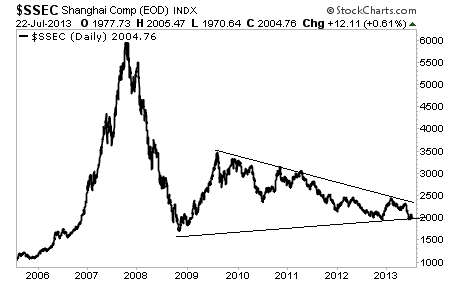 This is a Black Swan that few are noticing. If you look around the mainstream financial media in the US, you see talk of Bernanke tapering, discussions of rising interest rates and even the occasional story about how Europe is not fixed. But you won’t find stories about China facing ZERO growth. There’s only one I’ve seen and it was published in the Telegraph, a British newspaper.

We produced 72 straight winning trades (and not a SINGLE LOSER) during the first round of the EU Crisis. We’re now preparing for more carnage in the markets… having just started another eight trade winning streak…