Ignore the Next Fed Chairman Debate… Asia is in Collapse

The big news is what’s going on in Asia.

The US financial media continues to focus on who will be the next Fed Chairman, which is unimportant in the grand scheme of things. Greenspan created the biggest asset bubble in history. Bernanke bankrupted the republic and created an even bigger bubble trying to prove his misguided theories. Whoever takes over the reins at the Fed next will simply have the honor of being in the driver’s seat when the whole mess goes over the cliff.

Ignore the next Fed Chairman debate, the world has much bigger problems to worry about.

China’s economy is based on fraud, not actual growth. The talking heads believe China will hit 7% GDP growth this year. Their electricity consumption is only up 2.9%. Can anyone explain how a country can be consuming electricity at 2.9% growth and hit GDP growth at 7%?

Take a look at the Chinese stock market. We’ve just taken out the “recovery” trendline going back to 2009. And we’ve done this at a time when China has just pumped $1.6 trillion in new credit (that’s 21% of GDP) into its economy in the last two quarters… 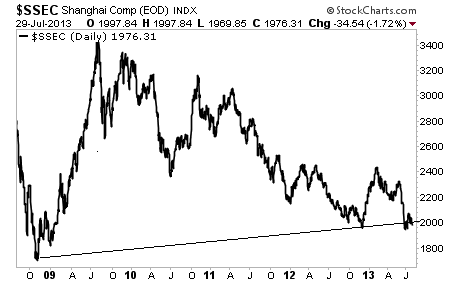 When you put an amount equal to 21% of your GDP into your banking system in six months and the stock market still falls, it’s GAME OVER.

Take a look at Japan. Abenomics (print even more money faster) was supposed to bring about growth. Instead, all it’s done is increase consumer prices. This in turn hurts incomes. And that implodes an economy (one which hasn’t seen major growth in 20+ years I might add).

The Abenomics bubble has burst. The Nikkei has failed to reclaim its trendline. This bull market is OVER. 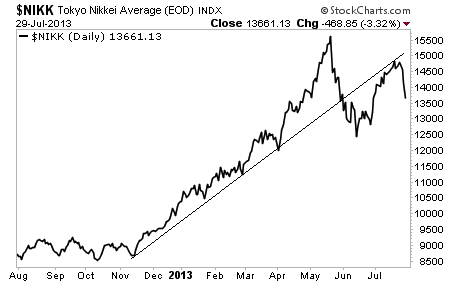 So the second and third largest economies in the world are in collapse with stock market crashes.

The Great Crisis, the one to which 2008 was just a warm up, is approaching. The time to prepare for it is BEFORE the US stock market bubble bursts.