Japan Is Flashing a Warning For What is Coming Our Way

The markets fell yesterday despite the Fed pumping over $5 billion into the system. The primary reason is that the Fed is once again talking about tapering QE. There’s also the uncertainty of who the next Fed Chairman will be (Larry Summers’ odds of filling the roll can be correlated to the dips in the market as Summers has been critical of QE in the past).

Stocks are on the edge of a small cliff. It we take it out we could go to 1650 in a heartbeat. And it we take out 1625, then look out, we’ll likely wipe out several months of gains in a short period. 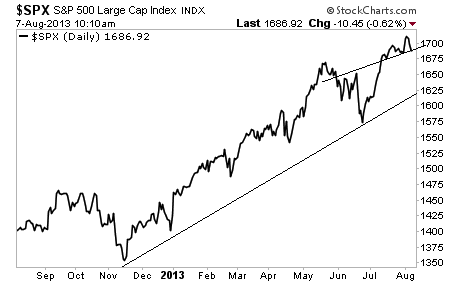 Speaking of which, the Nikkei has formed a triangle pattern. Watch this formation closely. Japan is leading the US as far as markets are concerned. A breakdown here would signal a major correction in US stocks. 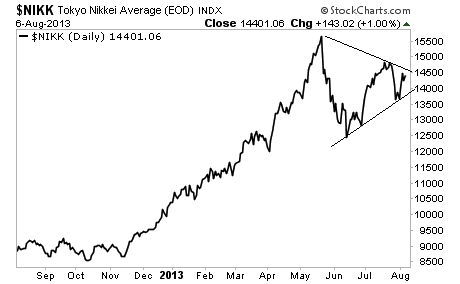 In the US, the Fed continues to argue that money printing and QE can generate growth. There is literally no evidence of this in history. Japan and the UK have both engaged in massive QE programs to little or no effect.

However, the Fed is terrified of losing control of the system, so it wants to continue doing anything no matter how futile in order to maintain the appearance of confidence. God forbid anyone figures out the emperor has no clothes…