The EU Crisis Will Be Back Very Shortly

The financial media continues to talk about how Europe is saved.

It’s odd that somehow everything is starting to look so much better now than Angela Merkel is up for re-election in Germany. Could it be coincidence that the worst Crisis in years suddenly went away right as the women with her finger on the “bailout” button needed to convince German voters that she’s doing a great job?

Remember, politics drive everything in Europe, including the markets (Spain’s political scandals had a bigger impact on the Spanish Ibex than a myriad of horrific economic data). Which is why everything is on hold until the German election ends next month.

Meanwhile, underneath this veneer of calm, things worsen. Recently…

Spain’s Ibex has traded sideways since late 2012. It’s now coming up against major resistance. We’ll see how that turns out. 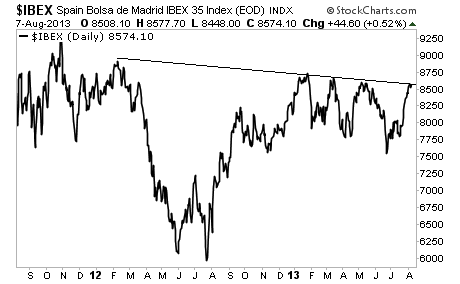 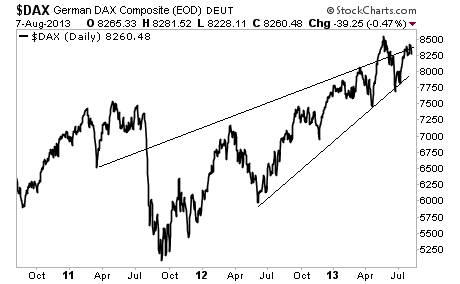 This market needs to explode to the upside or we’re going to see a correction that erases all of the gains since mid-2011.

The same is true of France: 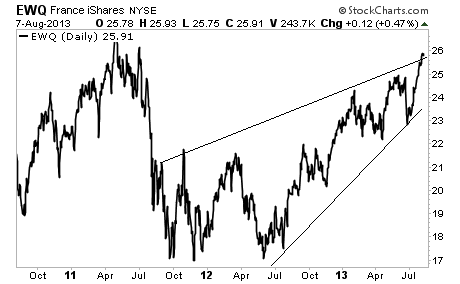 Again, we need a parabolic rise now or this is a false breakout and France’s shares are heading lower.

We’ve all seen how false hopes work out for the markets: BADLY. Given that Europe is beyond bankrupt at this point, I fully expect that that the EU Crisis will be back with a vengeance very shortly. When you consider that the entire EU banking system is leveraged at 26 to 1, it’s clear that there’s only one outcome possible here: implosion.