Asia’s Economic Engine is Breaking Down…

Asia has become the most important issue for the markets today. The Central Bankers’ dream of endless QE has become a nightmare for Japan while China’s “growth miracle” is rapidly falling to pieces.

Japan launched its “shock and awe” mega-QE policy in April 2013. Having already launched eight QE programs over the last 20 years (equal to 20% of Japan’s GDP), Japan has only experienced two years in which GDP growth has exceeded 3%.

Despite this failure, Japan’s political leadership, lead by Shinzo Abe opted to increase its QE efforts, announcing a QE program equal to $1.4 trillion, roughly an additional 20%+ of Japan’s GDP.

The hope was that this massive stimulus would result in an uptick in GDP and employment.

At the same time, inflation is beginning to rear its head.

Japan’s consumer price index registered its first increase in 14 months in June. The pace of increase was the fastest since 2008 when commodity prices were at record highs.

This is a huge problem. If the cost of living in Japan continues to rise without a commensurate rise in incomes or GDP, then Japan is finished as the benefits of monetary intervention will have been completely overcome by the negative consequences.

Another key development for the global economy that needs to be monitored is the collapse of China.

The mainstream financial media continues to proclaim that China’s liquidity crisis is solved and that the Chinese economy is growing at 7%.

However, we get confirmation of a slowdown in China via the latest round of corporate results there.

I also note the collapse in Copper (black line), which is closely mirroring the collapse of China’s stock market  (blue line) below. 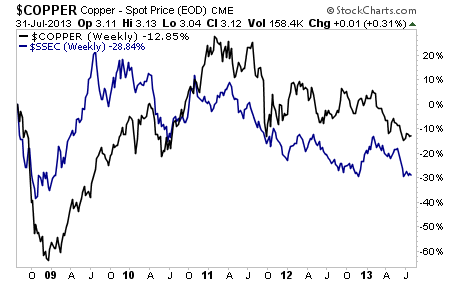 Combined, China and Japan account for roughly 18% of Global GDP. They are the second and third largest countries in the world respectively. The fact that the former is definitively in a hard landing while the latter is facing systemic unrest will not be something the markets can ignore for long.

And today, we’re taking action to prepare for another round of intense volatility. In fact, we’ve already started another winning streak, having locked in 13 straight winners since May. And by the look of things, we’re about to close our 14th and 15th shortly.