The One Line Bernanke is Praying Doesn’t Break

The QE party is ending. And the following hangover is going to be brutal.

Since 2007 the Central Bankers of the world have operated under the belief that they can hold the financial system together by engaging in round after round of Quantitative Easing (QE) without losing control of the bond markets/ interest rates.

They believed this because:

2)   They believe that they (Central Banks) will never lose credibility with the markets.

This entire theory crashed into the wall in April 2013 when the Bank of Japan announced its “shock and awe” QE program. 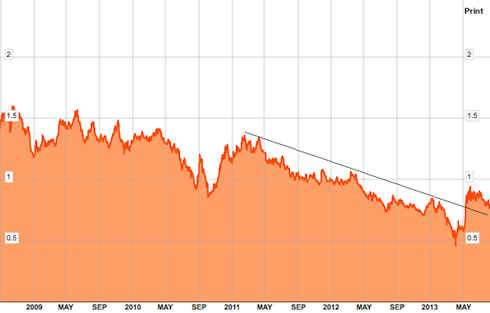 This matters because bond markets have a nasty tendency of spinning out of control very quickly once things begin to unravel. A great example of this is Italy, which was considered a rock solid pillar of the EU for the better part of the last 15 years… and then, it lost all credibility in a matter of weeks and began to collapse. 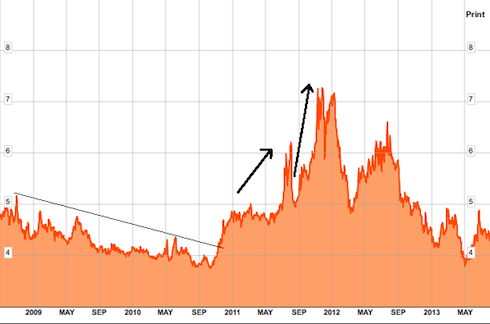 As you can see, Italy’s ten-year bond yield broke its trendline in the autumn of 2011 when the EU crisis first began to spread outside of Greece. It hovered around 5% for a few months and then skyrocketed above 6%. Later it spiked again above 7%.

Both of these spikes occurred in just a few weeks’ time. What was thought to be “rock solid” for over a decade became bankrupt in a matter of months.

On that note, Ben Bernanke is praying to the Market Gods that the ten-year Treasury doesn’t take out the line below: 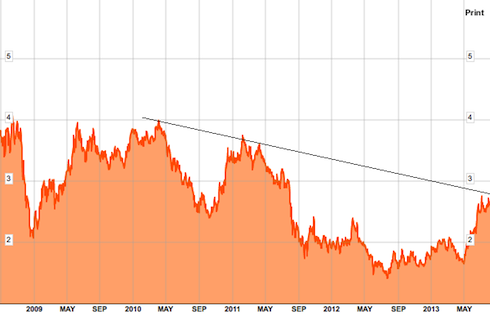 “So what?” many will think. What’s one trendline for bonds?

As the long-term chart shows. This isn’t just any trendline. This is THE trendline. Take it out and the 10 year will likely be yielding 5-6% in no time… which by the way is where it was for most of the ‘90s and very early ‘00s. 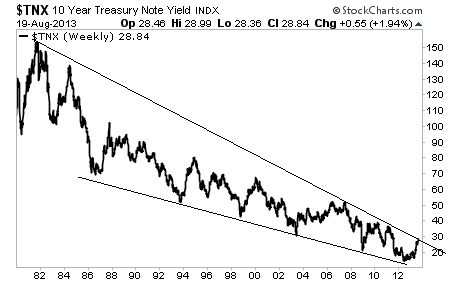 The only difference is that a drop like this would literally render the Fed bankrupt. The Fed currently owns 30% of all the ten year Treasuries in existence. If yields were to return to 5-6% on the ten year Treasury then the Fed would have literally lost several hundred billion Dollars on its Treasury holdings.

Sure, the Fed could print money to deal with this. But if Treasuries begin to collapse while the Fed is already buying them… and it can only buy more by money printing, then it’s GAME SET MATCH for Bernanke’s QE, the Fed, and the US economy.

And today, we’re taking action to prepare for another round of intense volatility. In fact, we’ve already started another winning streak, having locked in 13 straight winners since May. And by the look of things, we’re about to close our 14th and 15th shortly (one is already up 12% in just two weeks already.