The Fed Is Insolvent… Do You Still Think the Crisis is Over?

The single dominant belief for investors since 2008 has been that the world’s Central banks will not permit the markets to fall to pieces.

There are primary two primary reasons for this:

2)   Central Banks have stepped in time and again to prop up the markets every time they staged a significant correction since 2008. 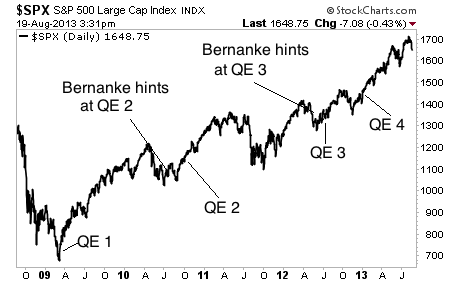 The problem with this is that all of these strategies were not fully thought through.

Consider the following. The Fed has only $50 billion or so in capital. With the Fed now owning over 30% of the ten-year market, every time bonds drop and yields rise, the Fed will erase ALL of this capital. Indeed, Mark Hussman of Hussman Funds notes that even a 100 basis point increase in yields will wipe out the Fed’s capital six times over.

And therein lies the core problem: by expanding its balance sheet so dramatically, the Fed has in effect spread the financial crisis from a private banking level to a public/ sovereign level. Put another way, when the next Crisis hits, it will not be Wall Street banks that go bust but the Fed itself.

Anyone who believes the Fed can “exit” this position is delusional. The single biggest trade for the last four years has been frontrunning the Fed’s asset purchases. When the Fed reverses course and begins selling assets, everyone will dump Treasuries in anticipation.

Indeed, we are already witnessing this with foreign nations selling Treasuries in record amounts in June when the Fed first hinted at tapering its QE programs. Japan and China alone dumped $40 billion that month (of a total $66 billion sold by foreigners that month).

By the way, this was the single largest Treasury dump by foreigners since August 2007. We all remember what followed that (the first round of this Crisis).

Sure, the Fed could print money to deal with this. But if Treasuries begin to collapse while the Fed is already buying them… and it can only buy more by money printing, then it’s GAME SET MATCH for Bernanke’s QE, the Fed, and the US economy.

And today, we’re taking action to prepare for another round of intense volatility. In fact, we’ve already started another winning streak, having locked in 13 straight winners since May. And by the look of things, we’re about to close our 14th and 15th shortly (one is already up 12% in just two weeks already.