The Real Reason the Markets Are Moving Up Today

The market is rallying today on August performance gaming. The talking heads will claim this move has something to do with fundamentals, but the reality is that the move up yesterday and today consists of fund managers doing whatever they can to end this month with their holdings as high as possible. Nothing else.

This is obvious in that volume is too low (the lowest since 1997) and there are simply too many awful things happening in the world to warrant any kind of bullishness. Indeed, if you believe war is good for the markets, consider the recent moves in Northrup Grumman and Raytheon: both of them weapons manufacturers.

Shouldn’t these companies be spiking higher now that the war drums are beating? 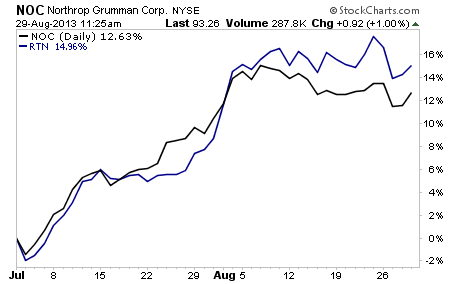 Behind this backdrop of things getting “better,” things are in fact getting worse for the markets. The primary driver or stock prices since 2009 has been liquidity from the world’s Central Banks.

That era is now ending.

China has said it sees no need for future Government stimulus. Japan’s Abenomics is failing miserably with July retail sales dropping -0.3% (compared to the 0.1% growth that was expected). Angela Merkel of Germany has said that Greece shouldn’t have been allowed in the Euro. The latest GDP print in the US further bolsters arguments that the Fed should taper its QE programs.

None of these are positive for the markets which are back in bubble mode.

The liquidity faucet for the markets is closing. Few investors have taken note but the Central banks are already moving to take them system off of life support.

We’ll see how that goes.