Europe is Saved But Greece Needs Another Bailout?

The market is erupting higher on the usual start of the month buying and some gimmicked economic data out of Europe.

In this case, the specific data point in question is Europe’s Performance of Manufacturing Index or PMI, which rose to a 26 month high. This, combined with claims that Europe’s recession is “over” has convinced traders that the European crisis has officially been put to rest.

I’ve written at length about how politics drives everything in Europe (particularly the media). German Chancellor Angela Merkel, the woman with her finger on the “bailout” button for Europe, is up for re-election at the end of September. It is not coincidence that we’ve seen a sudden improvement in Europe’s economic data in the last two months going into this event.

After all, the alternative to Merkel’s re-election is politically unsavory for Europe: Merkel’s primary opposition wants an end to the bailouts and Germany out of the Euro.

If you were a totally bankrupt European Government relying on the promise of additional funds from Germany to stay in power and your options were A) start cranking out better data now with the promise of future bailouts from Germany or B) having to deal with a German Chancellor who wants out of the Euro… which would you choose?

Indeed, if the European Crisis is over, why did Germany’s Finance Minister just admit that Greece needs another bailout? It’s been nearly four years since Greece’s debt woes first surfaced officially. Four years and three bailouts later and Greece is still not fixed… but the European recession is over as is the European debt Crisis?

This move today feels like a dead cat bounce. Spain’s stock market, the Ibex, which remains the canary in the coalmine for Europe, is rallying to retest former support: 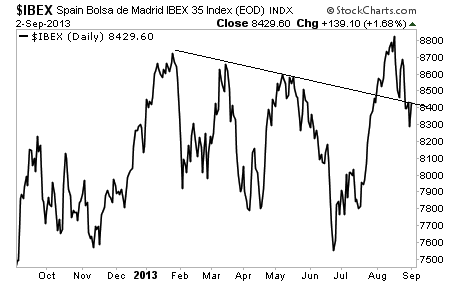 If we cannot break back above this line and stay there, then the market has called BS on the media’s campaign to convince the world that Europe is fine.