How the Experts Pick Stocks In This Environment

Value investing is often too narrow-minded.

What I mean by this is that value investors will often focus on a company’s “value” using a number of metrics and ignore all other aspects of its business.

For example, let’s say you find a company trading at 50% of its value. This in of itself would qualify this company as a “deep value” investment.

However, the question has to be asked, “why is this company trading at a 50% discount to its ‘value’?”

Put another way, what do you see in this company that the market does not?

My point with this is that companies’ stock prices do not trade in a vacuum. Earnings come from the economy (whether it be the public or private sector). In this aspect consumer trends, incomes, supply shocks and other external forces meet a company’s internal strengths (competitive advantages, competent management and the like).

I raise this issue because I regularly hear the media talking about how stocks are “cheap” and that it’s time to buy. But if the economy is contracting sharply (which it currently is) then even “undervalued” stocks will be affected.

With that in mind I want to draw you to the acceleration of economic deterioration in the US.

Those of you who regularly read us know that we prefer to use nominal GDP as a measurement of GDP growth in the US.

The reason for this is that all “adjusted” GDP data involves a “deflator” metric that is meant to adjust for inflation. The Feds often use an inflation adjustment that is even lower than their official Consumer Price Index metric (which is already massaged to downplay inflation) in order to make GDP growth look greater.

However, announcing ZERO GDP growth is a major problem politically. So what do the Feds do? They claim that inflation was just 8%, and BOOM you’ve got 2% GDP growth announced for a year in which real GDP growth was actually zero.

Using nominal GDP, it’s clear the US is back in recession as the year over year change has brought us to a reading of sub-4. Every time this has happened in the last thirty years the US economy has been in recession. 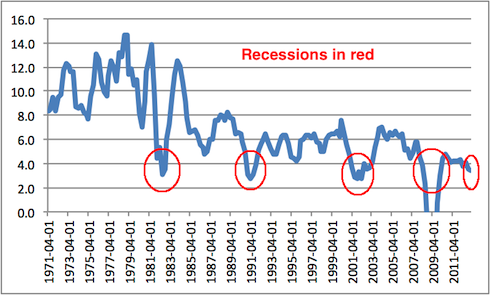 Investing in this environment requires careful stock selection, which is why we’ve created our new long-term value investing newsletter Cigar Butts and Moats which utilizes precisely the same techniques that Benjamin Graham and Warren Buffett used to amass their fortunes.

Already one of our picks is up 7% in just a month. And our others are on the verge of breakouts as well.

To sign up for Cigar Butts and Moats at a special entry level offer of $79.99.