The Trouble With Bonds, Europe and China

The market is being ramped higher by traders who believe:

1)   The US’s delay in entering Syria is bullish

2)   That the PMI data out of Europe indicates all is well over there.

The primary concern with these beliefs is that they overlook at tremendous amount of problems brewing in the financial system.

1)   The 10-year bond is yielding 3%. Contrary to what a Central Banker will tell you, higher interest rates are not good for stocks, particularly in an over-leveraged financial system.

2)   The European Crisis is not over in any way. Things were swept under the rug for Merkel’s re-election, but Portugal, Greece, Ireland and even France are on the verge of economic implosion. And as Cyprus’s “bail-in” and Poland’s recent nationalization of pension funds indicate, the next time stuff hits the fan, citizens will be literally picking up the tab with their savings.

The markets seem to sense that all of this. In the US we’re putting in what looks like a lower high. The market appears to be forming a Head and Shoulders pattern. 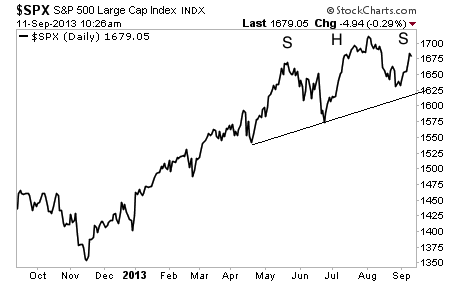 If you’re looking for actionable investment strategies on playing the markets, take a look at my bi-weekly investment newsletter, Private Wealth Advisory.

Published every other Wednesday after the market closes, Private Wealth Advisory, shows individual investors how to beat the market with well-timed unique investments.

To whit Private Wealth Advisory is the only newsletter to have shown investors 72 straight winning trades and no losers during a 12-month period.