There Are Major Signs of a Top Forming

The following is an excerpt from a recent issue of Private Wealth Advisory.

I’ve made the mistake of attempting to call a top on the “dot” in the past. The reality is that anyone who attempts to do so is exercising their ego more than their judgment.

Market tops occur when investor psychology changes. But it’s not a clean shift. Investors, like any category of people, are comprised of numerous groups or sub-sects: some get it sooner than others.

In this sense there are certain tell tale signs that a top is forming. This doesn’t mean a top is “in” nor does it imply a specific timeline for a top to form (say a week vs. a few weeks).

However, there are clear signals that appear around tops. And I want to alert you that multiple ones are flashing right now.

First and foremost, the number of stocks that continue to break to new highs is contracting sharply.

We get additional confirmation that the market is likely forming a top from the “smart money.”

Over the last 12 months, institutional investors have been net sellers of stocks for most of the time. This trend became much more pronounced in July with institutions selling an average of $1 billion in stocks during that .

In particular I want to note that institutional investors are dumping stocks at a pace last seen in the first half of 2008.

Among the financial institutions that are dumping stocks include Apollo Group, Blackstone Group, and Fortress Investment Group.

These groups are not only selling themselves, but have been urging their high net worth clients to sell stocks as well.

In addition to this, those at the top of the corporate food chain are uneasy with the prospects for growth. According to Markit’s semi-annual Global Business Outlook Survey of 11,000 CEOs found Chief Executives to be the most negative since the depths of the Great Recession in early 2009.

Thus, we see the “smart money” exiting the markets.  We also see fewer and fewer companies participating in the market rally. Those who run these companies are more pessimistic than at any point in the last five years dating back to the nadir of the 2009 collapse. And finally we have investors as a whole displaying the most complacency about the market in history.

On that note, Ben Bernanke has created the mother of all bubbles.

Today, the S&P 500 is sitting a full 30% above its 200-weekly moving average. We have NEVER been this overextended above this line at any point in the last 20 years.

Indeed, if you compare where the S&P 500 is relative to this line, we’re even MORE overbought that we were going into the 2007 peak at the top of the housing bubble. 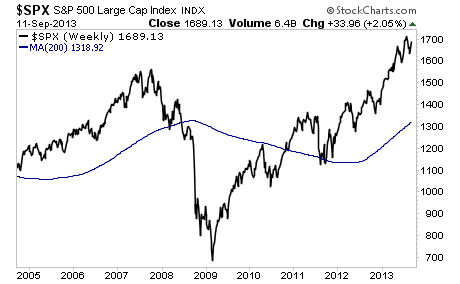 This time will be no different. The last time a major bubble of these proportions burst, we fell to break through this line in a matter of weeks.

We then plunged into one of the worst market Crashes of all time.

We’ve also taken care to prepare our finances and our loved ones for what’s coming, by following simple
easy to follow steps concerning our savings, portfolios, and personal security via my Protect Your Family, Protect Your Savings & Protect Your Portfolio reports.

I’ve helped thousands of investors manage their risk and profit from market collapses. During the EU
Crisis we locked in 72 straight winning trades and not one loser, including gains of 18%, 28% and more.

In fact, we’re currently on another winning streak having locked in FOURTEEN winning trades in the last two months, including gains of 10%, 11%, 21% and 25%.

All for the the small price of $299: the annual cost of a Private Wealth Advisory subscription.

To take action to prepare for what’s coming… and  start taking steps to insure that when this bubble bursts you don’t lose your shirt.